Not to be confused from their very first online short, To Boulderly Go.

To Balderly Go is the second episode of the second season of Mighty Magiswords, and the fifty-fourth episode overall. It was premiered in Cartoon Network Southeast Asia and Australia on March 4, 2018 and March 6, 2018 before airing in the US. It aired in the United States on May 1, 2018.

Prohyas is crushed when his good hair day becomes a no hair day and Vambre has to battle a furry monster alone while her bro is in shock without his locks! 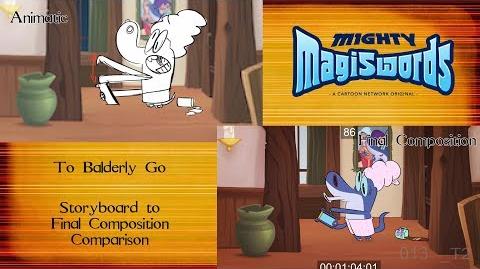 Behind the Magiswords Season 2! To Balderly Go!
Community content is available under CC-BY-SA unless otherwise noted.
Advertisement