The Incredible Tiny Warriors is the eighteenth and nineteenth episode of the second season of Mighty Magiswords, and the seventieth and seventy-first episode overall. It is the third 22 minute special. It is available to watch on the Cartoon Network website as of April 29, 2018. It aired in the United States on May 23, 2018.

The Warriors must use a Legendary Magisword to defeat a giant king who wants to eat celebrities. This proves difficult when being eaten by the King makes Vambre feel very small. 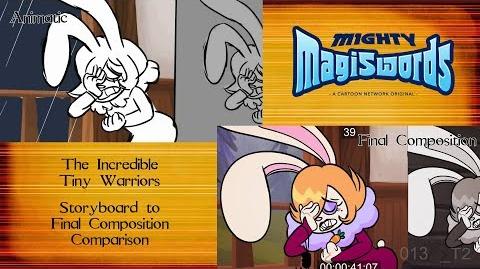 Behind the Magiswords Season 2! The Incredible Tiny Warriors