The Desolation of Grup

The Desolation of Grup

"The Desolation of Grup" is the twelfth short of Mighty Magiswords which aired in August 22, 2016.

The Warriors are hired to "vanquish" a dragon. Includes special bonus vlogs.

Vambre and Prohyas are hired by the Mysterious Hooded Woman to vanquish a dragon from its cave. Though they accept the job, Prohyas is somewhat hesitant, as neither them nor anybody of their generation have fought a dragon. With Vambre's encouragement, the two set off to find their target.

Arriving at the specified cave, Prohyas is confused to discover a rather homely looking cave. Upon entering, the Warriors discover said dragon is in fact a tiny, nonthreatening housekeeping dragon named Grup, who instantly offers them hospitality. Upon realizing killing Grup is not an option, Prohyas points out the Mysterious Hooded Woman said "vanquished" rather than kill. They decide to use this as a loophole to simply defeat Grup and claim victory, leading to a series of challenges designed to defeat him in a sporting manner. Shockingly however, Grup manages to win all the challenges by sheer dumb luck.

Growing exasperated, Vambre and Prohyas decide to challenge Grup to something he could never win even through bumbling; extreme Parkour. Vambre puts on an amazing acrobatic display, which Grup fails to duplicate on the first step, effectively "vanquishing" him. Upon returning home, with Grup in tow, the warriors are instantly terrified at the idea the Mysterious Hooded Woman would be unsatisfied with the results, only to find she's fine with the outcome. She reveals she never wanted Grup dead, she just wanted his cave to host a rave party in.

Upon retiring to the couch, Grup joins the Warriors and asks if he lives with them now. Prohyas instantly agrees while Vambre declines, until resting his head in her lap convinces her to agree. 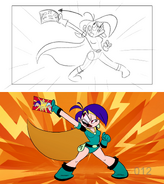 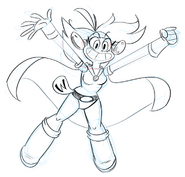