Straining Day is the sixteenth episode of the second season of Mighty Magiswords, and the sixty-eighth episode overall. It is available to watch on the Cartoon Network website as of April 29, 2018. It aired in the United States on May 21, 2018.

The Warriors teach Witchy Simone and her Slugburger crew how to use Magiswords. Prohyas teaches the basics while impatient Vambre tries to teach "the good stuff" too fast. 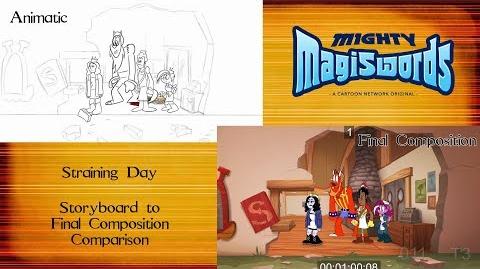 Behind the Magiswords Season 2! Straining Day!
Community content is available under CC-BY-SA unless otherwise noted.
Advertisement