The Warriors learn that Nohyas has been using a Selective Memory Magisword to erase select interactions with Prohyas's bizarre doppelganger.

This episode solves the continuity problems between the 3-minute shorts, 5-minute shorts, Adventure Academy shorts and the TV series as it reveals that Nohyas was the cause of the Warriors forgetting their adventures with him. The majority of the episode was finished at Inspedia. The cutaway scenes that show Nohyas meeting the Warriors and Prug and Nohyas introducing Handbre to them is derived from the shorts "To Boulderly Go" and "No Robots for Old Men", both shorts which were animated in-house at Cartoon Network Studios. The Adventure Academy cutaway was derived from the Adventure Academy shorts. The "blocky" segment was animated by Nick Bertonazzi Jr., the live-action puppet scene was performed by Kyle Carrozza, Luke Ski and Lindsay Carrozza with film direction by Rob Getzschman and the "He-Man" parody cutaway was animated by Sarah Ramert. The scene where Prohyas, disguised as Nohyas with the Pencil Magisword, in order to trick Nohyas into surrendering the Selective Memory Magisword, was derived from one of the micro-shorts of the series found in the CN Anything app, which was the first appearance of Nohyas in the Magiswords media. 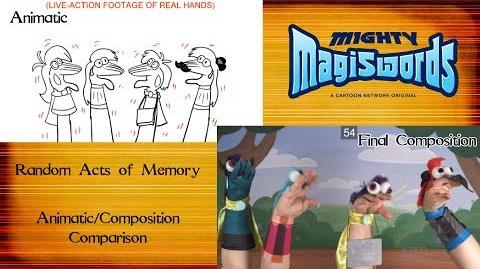 Behind the Magiswords Random Acts of Memory
Community content is available under CC-BY-SA unless otherwise noted.
Advertisement