Each other, Long James, Sidney (at times)

Kyle A. Carrozza
Grey Griffin
Hal Lublin
Dana Gould
Eric Bauza
Lindsay Carrozza
Luke Ski
Pirates are a group of criminals from Keelhaul Cove that debut in the episode "Case Clothed". These pirates fought off the Warriors for Hire in that episode.

The first one is a green fish pirate wearing an eye patch, a maroon colored waistcoat and a sort of boot for his tail fin feet. Dana Gould voices the pirate in the episode, Potion in the Ocean.

The second one, identities as Punchica in selective credits and by Luke Ski, has white skin with black lip stick, orange hair, blue mascara, earring and wears baggy brown pants and a blue pirate shirt. Hal Lublin voices that pirate.

The third one, named Dwight, is a big, hulking pirate with a "MOM" heart symbol tattooed on his arm. Eric Bauza voices that pirate in the episode, Bad Bad Cop.

The fourth one, named Plunderbite, is a blue cat with a black vest and bandana. Creator Kyle A. Carrozza voices that pirate.

The fifth one, credited as Crunch Dislikus, has dark skin, a red bulbous nose and shaggy hair. Hal Lublin voices that pirate in the episode, Bad Bad Cop.

The sixth one, unofficially named Number Nine, has dark pink skin with grey hair, wears two baldrics with a skull in the middle and appears to have some kind of bandages wrapped on his arms. Luke Ski voices that pirate in the episode, Bad Bad Cop.

The seventh one, identified as Kickica, is a dark green haired girl with a gap in her teeth and skull shoulder pads. Lindsay Carrozza voices that pirate in the episode, Bad Bad Cop.

The last one, named Mustachebeard (by Luke Ski) is a pirate with red hair and a mustache sporting spiked shoulder pads, red waist sash and striped shirt. Grey Griffin voices the pirate.

The pirates have nothing more but greed and vengeful personalities wanting to kill the Warriors in order to kidnap Princess Zange. They fight in any way possible and only back down from the outcome of their enemy such as the Giggly Face. The reason for their piracy is presumably due to lack of education and high unemployment. Some even speak like stereotypical pirates. As shown in Bad Bad Cop, the pirates also have a liking for singing as well as they joined along the Attractive Voice Magiswords' song. Plunderbite can play saxophone, Mustachebeard can play the trumpet and Crunch Dislikus plays the banjo while Scritchies, Kickica and Punchica are on backup vocals. The Fish Pirate got easilly offended when Witchy Simone questioned his eye-patch stating that she doesn't know him. Mustachebeard and Skull Shouldered Pirate seem to be close as they are seen eating and burping rudely together and both spoke with Australian/Cockney accents when confronted by the Warriors. Number Nine also reveals that clowns freak him out. Crunch Dislikus may have high intelligence as he used the Warriors' bickering against them in order to trick them by pretending to take them to the Interrigation Room but in reality to kick them out of the Wobblin Goblin. 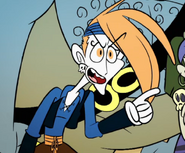 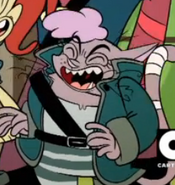