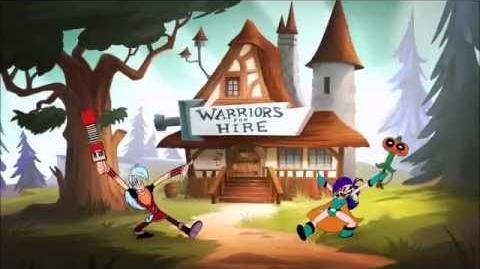 The theme song, however, is omitted from Cartoon Network's uploads of the 5-minute shorts on their YouTube channel.

On May 23, 2018, Kyle Carrozza uploaded the full theme song on his SoundCloud.

The opening sequence starts with Grup & Puppycat holding the Rad Rocket Magisword and he flies off screen. Then it cuts to the Warriors for Hire zooming on their Hover Swords with Grup flying past them. As they leave, the Mighty Magiswords logo appears. Then, it shows the Warriors falling down with their names visibly shown next to them. As they fall down to the ground, they do a funny jig with their Magiswords pointing at their headquarters (Prohyas holding the Accordion Magisword and Vambre holding the Zombie Pumpkin Magisword). Then it shows the next scene where the Warriors are being chased by Robopiggeh, Attacktus, Teri the Spider and a Trollblin up until they fall down of a cliff but in season 2 they fight with vegie guards . It later cuts to the Magiswords shop at Mount Ma'al where the owner Ralphio hands the two a Mirror Magisword and a Bacon Magisword. Then, it cuts to Prohyas battling Hoppus where he shoots a large celery stick at Hoppus with the Celery Magisword but Hoppus catches the celery with his buck teeth, while Vambre and her brain joyfully reading a Veronica Victorious book winth Colleen and her brain. Then, it shows a rapid sequence of the Warriors jumping close to the screen and heading off screen while slamming and using their Magiswords to the ground. First, Vambre uses the Ground Pound Magisword to generate an Earthquake. Then, Prohyas shoots a boulder with the Boulder Magisword. Next, Vambre uses the Lobster Claw Magisword to break the boulder. And finally, Prohyas destroys the boulder with the Chainsaw Magisword. It then cuts to a scene where Vambre wakes up a sleeping Prohyas with the Oinkus Oinkus Magisword who squeals loudly causing Prohyas to fly away but season 2 The warriors are changing in uniform recigment . Then, it shows the Warriors successfully capturing Phil the Thief with the Mummy Magisword, in which Princess Zange rewards them with the Musculary Arm Magisword . After which, it shows Prohyas and Vambre at a mysterious cave gleefully discovering and holding the Frog Missle Magisword up in the air but season 2 they hugging. Lastly, it shows the Warriors spinning around in a prepared-to-fight pose similar to many classical Japanese anime series with Vambre holding the Tomato Magisword and Prohyas holding the Dolphin Magisword,in season2 they pose similar like Pearl and Steven from opening of season1 of Steven Universe , and as they are prepared to strike in a battle-ready pose, they become shocked at what happens to Grup and puppycat, in which his outcome changes for the variety of the episode. Then, it cuts to the Mighty Magiswords opening title card in which Kyle A. Carrozza as the Announcer finishes the song by shouting out the title of the series, before the show begins.

On September 2020, creator Kyle Carrozza revealed the animatic and fully-animated versions of the initial theme song demo for the show. The song was initially performed by Carrozza himself. It's much the same as the final one except the majority of the clips are out of order, the scene with the Oinkus Oinkus initially had a close up of Prohyas sleeping before a small zoom out issued before the scene commenced, Prohyas and Vambre jittering at the sight of the Frog Missle Magisword for a few seconds longer as well as several deleted scenes. These scenes included an exterior shot of several secondary characters clenched together, a scene of the Dinosaur Kingdom with an angry King Rexxtopher and his Dino Patrol (including Jurassi) being ready to battle, Witch Way escaping from haunting Snowmanpires, Grup flying past the relaxing Cave Weirdos, Squideos and the Cave of Stuff on the Rad Rocket Magisword, Prohyas scarfing down Propellar Burgers next to a tired and lethargic Witchy Simone whom pats her head down in annoyance as she is carrying a platter of Slugburgers, and Vambre helping a struggling Noville fend off his uncontrollable Swish Navy Magisword. Also, rather than a jump cut, a pulled-down transition to the title card occurs.

Dan Avidan: It's their name and career!
Chorus: Mighty Magiswords!

Dan Avidan: Which is what they do best!
Chorus: Mighty Magiswords!

Dan Avidan: They have special tools!
For which they are fools

These guys lose their minds
When they collect and find

Dan Avidan: It's their name and career!
Chorus: Mighty Magiswords!

Dan Avidan: They have special tools!
For which they are fools

I think there obsessed!
They shall never rest

Dan Avidan: Which is what they do best!
Chorus: Mighty Magiswords!

These guys lose their mind
When they collect and find

Chorus: Oooh! Aaah!
Dan Avidan: From their home in Rhyboflavin!

Chorus: Oooh! Aaah!
Dan Avidan: They will see their missions through

Chorus: Oooh! Aaah!
Dan Avidan: With a bit of misbehavin

Dan Avidan: Have your some place to go!
Chorus: Mighty Magiswords!

Dan Avidan: From the Fickle Sea,
Through the Barren Faceland

Deepest Darkest Woods
You will see them firsthand!

Dan Avidan: You will never be bored!
Chorus: Mighty Magiswords!

They are at their peak
When they obtain and seek