Protector of the Sea Creatures (self-proclaimed)

"Potion in the Ocean"

Bill Kopp
Manfish the Fish Man is the self-appointed protector of the Fickle Sea who debuts in the Mighty Magiswords TV episode, Potion in the Ocean. He is voiced by Bill Kopp.

Manfish appears to be a diminutive tan-skinned man with orange eyes, wearing a a green fish costume with yellow teeth and fins, along with big white eyes, a white bodysuit and blue gloves and flipper boots.

Manfish is a brave and bold fighter, making sure the creatures of the sea are not harmed, although he strongly imposes his protection onto others whether they want it or not. Although he professes to do what he does for the good of the Sea and its inhabitants, most people find him more of a nuisance than anything else. This coupled with his overzealous attitude and fanatical views towards land-life makes him a recurring trouble for the Warriors for Hire. He speaks with a French accent, and tends to narrate his own physical actions. 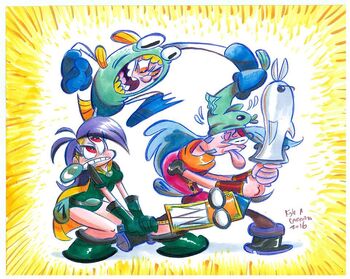 In his debut appearance, Potion in the Ocean, he slaps Witchy Simone for trying to steal the eye of the one-eyed newt. The Warriors for Hire and Simone begin to brawl with him until Prohyas decided to try negotiation. Manfish stated that all he wanted was to make sure the newt's not harmed. The Warriors try to figure out on how to solve it. After deciding to take the newt's eye and replacing both his eyes with Zombie Pumpkin's eyes, Manfish reluctantly lets them go.

In his second appearance, Biggest Fan, Glori throws rocks at him in order for him to attack her so the Warriors could save her. At first he tried to ignore her but Glori's repetitive nature influenced him to capture her and charge her for disturbing the sea. The Warriors later saved Glori and apologized to Manfish, who was injured by a boulder stuck to his face.

In Strange Nedfellows he appears to take the Queen Salmon for her own safety (despite her protests) and attacks the Warriors and Neddy with a giant monster comprised of various sea creatures, which is then eaten by a ravenous Neddy.

In Pachydermus Interruptus, towards the beginning of the episode, he battles the Warriors for Hire because Grup stole a goldfish from the Fickle Sea, which turns out that Grup won the goldfish, named Gwendolyn, from a carnival game. While facing the warriors, he began to gasp for water being unable to breathe. The Warriors hand him a glass of water, and he vows to return after lunch. Later in the episode, he reappears inside the mouth of a bear, dubbed as Manfish Bear the Bear Manfish giving a final warning on the return of the goldfish, as well as claiming that his new transformation gives him a new outlook on life. He becomes further enraged and shocked upon seeing Grup eating Mr. Pachydermus' tuna fish sandwich in front of Gwendolyn and proceeds to attack the Warriors. The Warriors defeat Manfish, causing the bear to spit Manfish and kick him away while walking off-screen.

In Unconventional Dolphinism, he hosts a panel during Dolphin Con. Prohyas, depressed from being separated from Dolphin Magisword, asks Manfish if they are friends. Manfish denies this due to their differentiation in species. He hears the cries of Janet the Sealdebeast, who is being interrogated by Vambre and Witchy Simone over the Narwhal Magisword, and jumps into the Fickle Sea to stop them. Eventually, a giant flying fish swallows Janet and Manfish chases after it.

Manfish is one of the oldest characters Kyle Carrozza created that later transitioned to Mighty Magiswords. Kyle created Fish Man in 1992 as an entry for then-Nintendo Power's contest for new characters for Mega Man: Robot Masters. 22 years later, Kyle discovered a folder full of old drawings and decided to redraw him.