Kyle Adam Carrozza is the creator of Mighty Magiswords and the voice of Prohyas Warrior as well as the voice of numerous reccuring characters such as Grup the Dragon, Old Man Oldman, Nohyas and most of the talking Magiswords (his most famous Magisword role being Zombie Pumpkin Magisword) among many others. Prior to Magiswords, he also created MooBeard the Cow Pirate which premiered in Nickelodeon's Random! Cartoons in 2008.

Kyle Carrozza was born on May 19, 1979 in Catskill, New York. As a little kid, Kyle was influenced by many cartoon shows on television, mostly Bob Clampett's Looney Tunes. Most of the cartoons he watched were inspirations for his own drawing style. Shows such as Beany and Cecil and Garfield helped influence his drawings. He also got into anime in 1996 while he was at high school and particularly enjoyed watching Ranma 1/2 and Project A-ko. Several of his animation influences were from Bob Clampett, Bruce Timm, Doug TenNapel, Jhonen Vasquez, Tex Avery, Ralph Bakshi and numerous others.[1]

During his summer times when he was a teenager, he attended several drawing classes titled "Center for Character Animation" where he studied under famous cartoonist Brian Mitchell. Mitchell taught him most of the things he never got at school. He graduated from Catskill High School in 1997 and in the Art Institute of Philadelphia in 1999.[2]

He first did some storyboard work for some independent animation studios for pitches that never got greenlit. He later worked on Jon McClenahan's Startoons studio when he was a senior in high school doing cleanups and inbetweens in Animaniacs for two days. Then, he later got a job at Funnybone Interactive in Canton, CT where he was an animator, voice actor and character designer for selective JumpStart titles. After that failed through, his short MooBeard was greenlit by Frederator Studios and it premiered in Random! Cartoons in 2008.

He also did several storyboards work for Fanboy and Chum Chum!, another Random! short that got greenlit as well as storyboards for Fish Hooks and both storyboards and Flash animation for Doc McStuffins as well as character layout for The SpongeBob SquarePants Movie: Sponge Out of Water before going to Cartoon Network.

Kyle's new animated series Mighty Magiswords finally premiered on Cartoon Network Video and Cartoon Network Anything on May 6, 2015. This series is billed as the first online digital series. Kyle also provides the leading voice of Prohyas in the show and does the voice of the announcer who says all the magiswords names in the show, as well as numerous other voices. This show also stars Grey DeLisle as Vambre and Eric Bauza as Phil and Hoppus. His shorts are storyboarded by his recently married wife, Lindsey Smith and famous comedy musician Luke Ski, who is a co-host on the podcast "Kyle and Luke Talk About Toons".

He created the characters in high school in 1996 and pitched it between 2005–2007 under two different titles; "Legendary Warriors for Hire" and "Dungeons and Dayjobs" until Cartoon Network picked it up.

While working at Funnybone, he started his comic book series Clare's Stupid Life for Antarctic Press. It has since gone on to become a 6-part series for Radio Comix's long-running comic anthology Furrlough. Clare was recently voted the ninth most popular comic feature in FURRLOUGH'S 140+ issue history.[3] He also did some work on the comic series Ninja High School for the same company. He also did a comic titled Frog Raccoon Strawberry on Dumm Comics from 2008 up to 2014 because he and his animator friend, John Berry, were too busy on production with Magiswords. Kyle also did graphic drawings and designs for Kee Kee Koki; a Spanish comic created by Looney Tunes artist and cartoon director Dave Alvarez. He even created some characters for the comic series and original designs. He also worked on the ABCmouse.com website for a year. He was also a freelance artist at one time, offering his services to many deviants (patrons of the website DeviantArt) and doing graphic designs.

Most of Kyle's non-cartoon work is music, as Kyle is a profound musician. He is very skilled at playing accordion and keyboard. As a youth, he recorded his songs with a karaoke machine and later upgraded to using a computer when he was 21. He currently writes songs monthly for The FuMP and occasionally plays live shows. 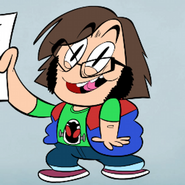