Messanger to the Royal Rhyboflavians, Villain

The Mystery of Loch Mess

Eric Bauza
"All vegetable magiswords shall be mine!"

Hoppus is a recurring antagonist in Mighty Magiswords. He is a rabbit mercenary and Magisword user. He usually appears as an enemy of the Warriors for Hire, either at the behest of someone else or for his own purposes. He is voiced by Eric Bauza.

Hoppus is openly stoic, and detests any notion of being "cute". He is very skilled in the way of Magiswords, but has no respect for those around him either friend or foe, usually coming off as hostile or threatening. He claims this is due to past betrayals he has suffered, which has led to a great amount of difficulty putting his trust in other people. Because of this, Hoppus is largely unable to openly ask others for help, and refuses to return to his home village even at Danelda's request. He holds little respect for Vambre, and even less towards Prohyas, seeing them as undisciplined warriors not fit to use Magiswords. Despite his high opinion of himself, Hoppus is not above underhanded tactics. He has at times resorted to stealing Magiswords, and fraudulently posed as being on assignment from the King of Rhyboflavin to steal the Warriors for Hire's reward money.

The only thing Hoppus seems to genuinely enjoy in life are Vegetables. Being a rabbit, he is a strict vegetarian, and often champions the lifestyle to other people. As a result of this, Hoppus has an strong fondness for Vegetable-based Magiswords, which includes a number of fruit based Magiswords such the Tomato or Zombie Pumpkin Magisword (although he discarded the latter after believing it was a useless Magisword). His most-cherished Magisword is the Carrot Magisword, one of the few Magiswords capable of being used as an actual Sword.

As a result of his combined love of Vegetables and Magiswords, Hoppus developed a strong adoration for retired adventurer and Broccoli Farmer Kablammica Warrior and her Cream of Broccoli Soup, which do not go unnoticed by her husband Norman. After being defeated in battle by the combined efforts of Norman and Danelda, Hoppus dejectedly conceded defeat, only for Norman to welcome him into his home, leaving Hoppus in a tearful state of appreciation.

The only thing that appears to terrify Hoppus are tortoise, believing that they are his species natural enemy. The very sight of Botticelli, the Adventure Academy mascot who had been turned giant, caused him to panic and flee in terror.

Hoppus was originally part of a three-rabbit team consisting of himself, fellow Magisword user Danelda, and an as-yet unnamed third member. According to Danelda, their third teammate went completely power-mad, causing Hoppus to abandon their home village and leave it in disarray. He has since taken up residence in a tent situated in the Kotassian Pass, a field located between the Kingdoms of Rhyboflaven and Kotassium, working as a mercenary without allegiances

Prohyas tried to help Hoppus pull out a giant carrot from the ground. Prohyas used the pencil magisword to make him pull it out, but he failed and he decided to add more shading to the fist but it didn't work. Later, Prohyas uses the Dolphin Magisword's Dolphin Water on the carrot, causing it to grow. Hoppus, excited of the size of the carrot, gets upset because he now realizes he has to pay Prohyas for his services now.

Hoppus later appears challenging Prohyas to a duel to claim his vegetable magiswords as claimed by his motto "All vegetable magiswords shall be mine!" Hoppus uses the celery sword on him when Prohyas failed to use it properly, and Prohyas shoots a giant tomato at Hoppus trapping him with his Tomato Magisword in which Prohyas states that tomatoes are fruit.

In his first appearance "Hands Down", he was hired by the King of Rhyboflavin to pay Vambre and Prohyas a reward for vanquishing the Underground Hand Beast. He then appeared towards the end of "The Land Before Slime" claiming to be send from the King of Rhyboflavin to retrieve a fine for the damage done by King Rexxtopher in that episode (due to the two stealing the baby of Rex's sisters' best friend) and takes their payment made by Goomer as a result. Turns out it was a scam done by him and Phil so they can blow it all on Slug Burgers.

His major appearance is in the episode "Zombie Reasonable" where he tries to take the Zombie Pumpkin Magisword as clear to his motto "All vegetable magiswords shall be mine!", even though pumpkins are fruit. He tried to use the Seeds of the Undead move on the Warriors for Hire but the zombie pumpkin sword does nothing. Vambre later takes the sword from him, but later retrieves him back from tunneling underground the snow of Transylberia and snatching it. He tried to use the zombie pumpkins powers to remove their "freckles" but it's multifold since they have no freckles. He gets upset that the magisword won't do anything and claims he doesn't want it and throws it at the snow and pouts childishly. After Prohyas shoots undead seeds at him with the sword, he changes his mind and accidentally slices the zombie pumpkin, making him lose interest again. The zombie pumpkin uses regeneration powers and Hoppus leaves the scene annoyed when Prohyas used the Zombie Bark Buster move on him.

The main focus of Hoppus was in the short "The Saddest Little Bunny" where he was hired by the Grand Elders of the Sheepy Jungle to guard the Gorillamb statue. The Warriors think he's sad even though he claims he's just stoic. After noticing Vambre's Tomato Magisword, he tries to steal it from them. He later gets irritated when Vambre creates an "Easter basket" from the Giant Egg, Instant Wrapping and Wickersnapper magisword claiming it as an offensive rabbit stereotype. After noticing their Celery and Onion Magisword, he finally determines to hunt all vegetable magiswords. He was later trapped by the Celeronion summoned by the two and tried to escape, but resorted to eating the celeronion, much to his delight. The last time he was seen was in a small gag at the end following Grup's "Bum ba dum ba dum bum" with a "Boing!".

Hoppus appears in the first 11-minute Mighty Magiswords TV episode, "The Mystery of Loch Mess", being hired to give Prohyas and Vambre a task on freeing the delivery folk captured by Queen Porcina. He accepts Grup's offer for a sandwich.

In his second appearance, Gotta Get Grup to Get Down, he was hired by Witch Way to be the rabbit for the classic "Pull a rabbit" magic trick and said his paid line, "Every bunny loves Witch Way!", despite his regrets. He later received his payment and dashed off.

Hoppus made a major appearance in the episode "Gut Feelings" where he requires the Warriors assistance on finding the person who stole his vegetables and Carrot Magisword. He had a hard time doing this due to his history of being betrayed. They later take a visit to their mom, Kablammica Warrior who makes them broccoli soup, which Hoppus enjoys. Kablammica aides Hoppus by letting him use her Cardboard Replica Magisword to lure the proposed thief. While Hoppus was asleep, the Warriors found out that the thief was Prohyas' Stomach who was forcing Prohyas to eat vegetables. The moment Hoppus woke up and noticed the Warriors trying to place back his vegetables, he accused them of being the thieves and attacked them. Using the Super Teamwork Combo "Lulla Bye Bye" against his Super Hoppus Rage combo, Hoppus was knocked fast asleep. At the end of the episode, he visits Kablammica and Norman's broccoli farm again requesting more soup.

Hoppus also made the appearance in the episode "They See Me Trollblin", found out that his vegetable magiswords were stolen and stared to invade Kotassians' village.

Hoppus made another major appearance in Hoppus the Hunted, being challenged by Norman Warrior to a Magisword duel in which the loser must leave the farm and never return. Meanwhile, The rabbit sorceress Danelda is searching for Hoppus in order to bring him back to their village. Danelda decides to work at the farm until Hoppus decides to come back with her.

Hoppus was actually based on an entirely different character Kyle created called Bunn-Lorr the Stuffslayer (previously named Bunnlos) for a potential video-game inspired pitch series called "Catguy Kapowie". The idea was that he would be a Toon Link-esque character that Catguy would face in Bunn-Lorr's owners' handheld system. This would balance out between the retro 80s arcade characters and the modern video game characters. The pitch didn't go through since the concept was too much like Wreck-It! Ralph but the character was later reworked for Hoppus. They both even have the same sword. 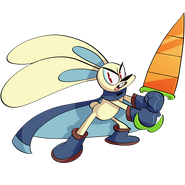 Eyecatch 1 (Hoppus hopping on Prohyas' back) 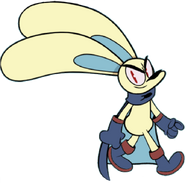 (Need the high quality image of this...)