Glori is dark-skinned, and wears a green outfit which strongly represents Vambre's, with a pink waist strap. She dons a pink cape, earrings that resemble Zombie Pumpkin Magisword's face, and a purse that resembles Grup. She has pink poofy hair with a single curly strand sticking out. She has green boots with pink soles.

Glori has an upbeat, yet obsessive and stalker-like personality, wanting to be saved by the Warriors no matter the danger involved. She has an intense one-track mind, which often causes her not to consider others in her efforts. She has patterned huge portions of her personality and look after the Warriors for Hire, though she totes a high opinion of herself, referring to herself as "the Super cute Glori".

After Prohyas loses his patience and yells at Glori for stalking him, her fanaticism for the Warriors shatters, and she instead dedicates her life to becoming the world's greatest adventurer for no other reason than to spite them. No longer focused on the Warriors, Glori begins making efforts to establish herself as an adventurer, with disastrous results.

In her debut episode, she became very clingy to the Warriors when she met them at Slugburger and wants them to save her. First, she tries Gateaux but he immediately returns her to the Warriors. Then, she tries the Cave Weirdos at the Cave of Stuff but the Warriors were not buying it. Later, she tries Man Fish the Fish Man which influenced them to give her a warning that if she's in trouble again, they will not save her. Lastly, she decided to get swallowed by King Rexxtopher. After being rescued, she wants to be rescued again but Prohyas tells her off. After that, she vows to be a Warrior of her own and swore revenge against the Warriors.

Glori would soon afterwards enroll in Adventure Academy, next being seen concocting potions in "School's In, Oh Bummer!". Glori absentmindedly causes the school's mascot, a turtle named Botticelli, to grow to enormous size leading to the school being attacked. The Warriors quickly subdue Botticelli, saving the school and rescuing both students and allumni alike, much to Glori's horror at glorifying her former heroes.

In the episode "Quest for Knowledge", Glori returns in hopes of stealing the legendary Knowledge magisword from the warriors. This backfires when she is tricked by Vambre and her brain and she surrenders the magisword. Glori swears revenge on the Warriors once more, only to be chased out of the Adventure Academy by a griffin. 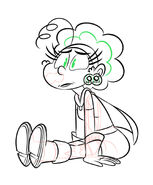