Fixing-a-Flonk! is the seventh episode of the second season of Mighty Magiswords, and the fifty-ninth episode overall. It was first aired in Australia before airing in the U.S. It aired in the United States on May 8, 2018.

Wanting to stop Flonk from being an evildoer for good, Prohyas tries to find Flonk a permanent venue for his nasty comedy. Vambre, however, wants to deliver him to the cops as usual. 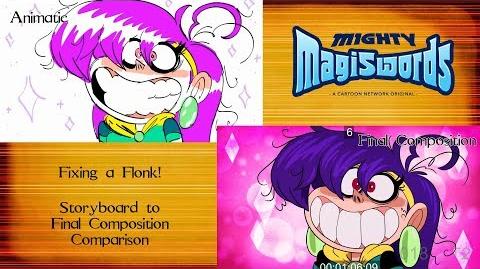 Behind the Magiswords Season 2! Fixing a Flonk!
Community content is available under CC-BY-SA unless otherwise noted.
Advertisement